about After Hours/a journal of Chicago writing and art

After Hours magazine is a literary and arts journal published twice a year featuring Chicago area writers and artists. The magazine was launched in June 2000 with by Albert DeGenova who continues as publisher and co-editor with Pat Hertel. The magazine has gained a reputation for high quality content and production; it’s know for it’s striking covers; and it has proudly published a number of writers for the first time, writers who have gone on to establish themselves as literary figures in Chicago and beyond.

Following is the editorial from After Hours, Summer 2010, the tenth anniversary double issue of the magazine: 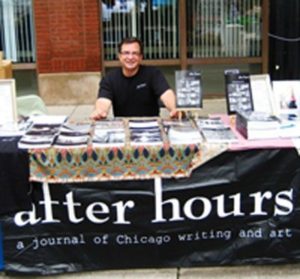 Back in June of 2000, sitting expectantly at our first Printers Row table, one whole issue of After Hours under our belts, we really didn’t know what lay ahead. We had a vision of showcasing Chicago area writers and artists, of presenting an outlet for the “Chicago voice.” Over the past 10 years, we’ve learned that there is not one voice, but many (some not even from Chicago) who together have created the style for which After Hours is known: elegant, smart, thoughtful, quirky, down-to-earth.

After Hours has had the honor of being able to print an amazing body of work of regular contributors whose writing graces nearly every issue. On the other hand, each issue always adds new names to our list. We’re very proud of the many first-time publications we can take credit for, with a number of those first-timers moving on to the publication of chapbooks, books, plays, and novels. We congratulate all of you (you know who you are) and we are proud to have been a part of your literary history.

We like to think that with After Hours we have created a rich archive that future readers will go to when they want to know what the best Chicago writers and artists were producing at the beginning of the 21st century. We look forward to discovering more new voices and continuing to stock that archive. — Albert DeGenova & Pat Hertel, After Hours Co-Editors