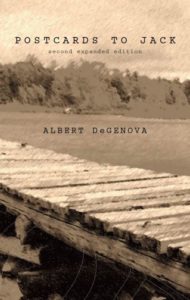 One of the best things about Al DeGenova’s Postcards to Jack is that it is aware that a book is a performance (and certainly part of the credit for this goes to Matt Barton and Naked Mannekin Press). The chapbook is right for this collection, and postcards from the road are an appropriate twenty-first century shattering of the road trip narrative with which Jack Kerouac is inevitably associated. Scattering haikus set in a handwriting font among (mostly) prose poems is consistent with the haibun tradition, and it imparts a studied appearance of spontaneity that is a nod to Kerouac’s poetics and a tribute to DeGenova’s disciplined practice of improvisation. Ending the collection with home makes it a nostos journey (not far from Jack’s travels, which never strayed as far from Lowell as one might think in search of “it”). The road is not so much a matter of getting from one place to another as of getting to here now and seeing it new.

This little book begins before it begins, with a poem printed to appear as something scrawled on plain brown paper, on de-iced Indiana asphalt: “nothing moves / save me / at 80 mph…” On the Interstate in Indiana praying for salvation at 80 mph “driving into sunrise / with ten thousand days in tow” — a stunning image of the specific elsewhere in which this poet reads Jack “Loud but not so clear anymore.”

“I’m drowning in this new century, Jack,” DeGenova writes. “Gotta go, gotta go, gotta go, we’re all gonna fuckin’ explode!” Not the atom bomb or the creeping suburbanization of 1950s Cold War America, but “plastic and Wi-Fi nights of virtual conversation — programmed thinking, programmed wars, programmed music, programmed religion… Miles is in the sky… cell phone rings, and no one is there…”

Program or be programmed, as they say…

Yes, Kerouac has a way with sad, and so does DeGenova, “a small word for a poet,” but every poet knows small is beautiful in particular — and that there is no place that is not.

Writing to Jack from all over the place, DeGenova makes his way home, to “the sad eternal core,” which is, no doubt, “old as coal” — not older than love, but its “sad distillate,” made flesh, I’d say, in los abuelos de san juan, the viejos gathering in a plaza by the bay, the dance that “holds the song in its pace.”

DeGenova places the image of being “homesick all my life” in Napoli, but it is with him (as it was with Jack) everywhere he writes. Having spent much of my life on Route 66, that particular gotta go gotta go gotta go struck a chord — blowing yourself into words, becoming “the asphalt of sad Rt. 66,” sets me to thinking how hot asphalt on that old road broken by the rhythm of stop signs and local intersections differs from the de-iced asphalt of the Interstate.

There is so much fuel here for contemplating what it is while on all that road going, going, I think, even when we’re there for the pasticcio. There is a touch of sadness in the image of home at the end, love older than coal that is the product of life decayed (on its way to being diamond):

…Sometimes it’s just time
to go home. Go Jack, to your cats
where Mamere irons your shirts and makes

your highballs. I think it’s time –
my grass at home needs cutting, the deck
needs cleaning. I have to go now

put this box of sad souvenirs away in my closet
behind the beat old gym shoes and
silk ties fallen from their plastic hangers.

I miss her warm thigh against my hip.
There is pasticcio baking in the oven.
Roses are blooming over my arbor.

In the end, as much Candide as Kerouac. I catch my breath with the thunderstorm singing “her wicked, sexy song.” And I want to say to the poet who has made this beautiful sad book, this performance, yes, yes, sometimes it’s just time — and we can all be sure if this is where we want to die we will. We will. There is no other place for it.

These poems are bright islands

in the black of the back-wood highways that still criss-cross our country.  They are the thin blue notes of jazz that circulate under the neon signs of all-night diners.  And, yes, they are postcard messages across time and space to a simpler and more vital period of American life when a young man might follow his hopes and sensuality forever into a younger country lost in the promise of its destiny.

Jack Kerouac put an American landscape of the post Eisenhower years into his own words, making that landscape his own for generations to come—a long scroll into the passions, loves, and loss of our poor small bones.  That landscape has now departed and fallen beneath the bulldozers of the most powerful nation in human history…the two lane, three lane, four lane interstate highways scattered in the rubble of superhighways of indifference.  But there is a time and space still for postcards to that inner world that Jack wrote of, and our survival as a civil and progressive society may well depend on our ability to write and read those postcards.  Albert DeGenova has found the right notes to sing in this volume of the open road.

by Jared Smith, author of The Graves Grow Bigger Between Generations

tightly expressed, and tautologically complete… DeGenova weaves his poetic language into poems that are tough. They express what the world needs to hear from the dark shadows and raw alleys of 21st century America. Haibun. Fresh haibun like the off-tune remark getting swiftly punctuated by the soft, warm open palm slap from a scorned woman. Yes, his haibun and short poems are fresh. Expertly wrought and forged from the authentic iron of experience. Postcards to Jack is wonderful. Kerouac would have been jazzed to read them.

by Jeffrey Winke, author of  What’s Not There (winner of a Merit Book Award from the Haiku Society of America) and a new collection I’ll Tell You So, recently published by Cross+Roads Press.