“a fly in the soup,” on being a young writer in Chicago 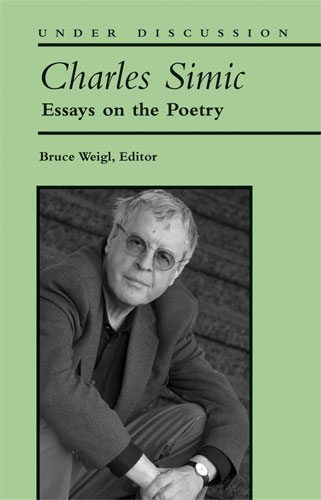 For the uninitiated, the main entry hall of Oak Park River Forest High School (Oak Park,  a suburb just adjacent to Chicago’s West Side) has a special andproud feature identified by students as the “wall of fame.”  It consists of neat rows of framed pictures of notable graduates of the school.  Some more recognizable than others, some are Hollywood types, others scientists or statesmen, and of course the school’s Nobel Laureate Ernest Hemingway.  (You’d think with Hem’s literary stature and international fame the school could go a little bigger and with a better quality photo print, but I digress.)  Not very far from the photo of Hemingway is a photo of Charles Simic with the caption “poet.”   Taking a quick poll, I count five of my poet and English-major-type friends who actually know who Simic is.

Not unlike Hemingway, Charles Simic left Oak Park shortly after graduating from high school.  Also like Hemingway, Simic left Oak Park determined to be a writer.  Also like Hemingway, Simic went on in 1990 to win a Pulitzer Prize for his poetry (having been a runner up in 1986 and 1987).  In 2007, Charles Simic was named the fifteenth Poet Laureate of the United States.   His other awards, including the Wallace Stevens Award, and publications of poetry, non-fiction, and translations are too many to list here (but easily found with an internet search, or at the library).

And to think it all started at OPRF, in Chicago-land.  Well, almost.  Simic grew up in Belgrade, Serbia (then part of Yugoslavia), during World War II.  As refugees, the family moved to Paris (where Charles began studying English) and eventually to the U.S.  The Simics arrived in Chicago in 1955.

In his memoir a fly in the soup, Simic credits teachers at OPRF for encouraging his literary bent and his love for poetry.  During his high school years he began writing poetry in English, as well as becoming a painter.   “My school was no joke,” he writes in his memoir, “One had to study, do homework every night and be prepared to answer intelligently in class.  My classmates were mostly children of professional people and had the confidence and ability of well-brought-up young people…I think I was the only foreigner in the school, and so I was a curiosity.”

But what is it about Chicago that makes writers?  And “tough” writers at that: Hemingway, Sherwood Anderson, Algren, Sandburg, Dreiser, Richard Wright, Royko, even Simic.  Certainly not just a suburban high school.  Maybe it was the midnight el rides coming home from work or college night classes.  Maybe it was the late-50s Chicago literati with whom Simic spent time, as all good 20-year-olds do, drinking, smoking, listening to jazz, watching the sunrise on Lake Michigan.

“In those days,” Simic describes, “much more so than today, radical intellectuals came from working-class backgrounds.  They worked with their hands, or they were union officials. Children of immigrants, they had plenty advice for a newcomer like me…you ought to be writing poems about old Polish ladies who sweep the downtown offices at night.”

Charles Simic has been called an American poet with a Serbian accent, he describes the “Chicago effect” in a fly in the soup:

Chicago gave a better sense of what America was than some small town or New York would have.  Its mixture of being, at the same time, very modern and very provincial is a national characteristic.  Add to that the realization that so much of our national prosperity depends on cheap labor.  Immigrants and blacks kept Chicago humming.

I like the anarchy of the city.  There were dives and strip joints a few blocks from the monumental Art Institute…Chicago was the garage sale of all the contradictions America could contain.  A rusty water tower on the top of an old warehouse would look as beautiful as some architectural wonder along the lakeshore.  Every notion of aesthetics one previously held had to be revised if one were to appreciate the city.  My greatest teachers, in both art and literature, were the streets I roamed.

So, your Poet-At-Large roams the streets still.  You come too.